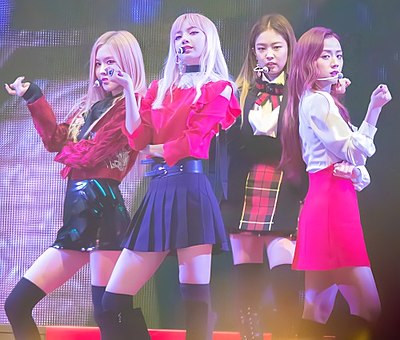 Blackpink (Korean: 블랙핑크; RR: Beullaekpingkeu, commonly stylized as BLɅϽKPIИK) is a South Korean girl group formed by YG Entertainment, consisting of members Jisoo, Jennie, Rosé, and Lisa. The group debuted in August 2016 with their single album Square One, which featured "Whistle" and "Boombayah", their first number-one entries on South Korea's Gaon Digital Chart and the US Billboard World Digital Song Sales chart, respectively.
Blackpink is the most successful Korean girl group internationally and have often been dubbed the "biggest girl group in the world."[1] They are the highest-charting female Korean act on the Billboard Hot 100, peaking at number 13 with "Ice Cream" (2020), and on the Billboard 200, peaking at number two with The Album (2020), which also set the record for the best-selling album by a Korean girl group and was the first to sell more than one million copies.[2] They were the first girl group to top Billboard's Artist 100 and the first Korean girl group to enter and top Billboard's Emerging Artists chart.[3] Blackpink was also the first female Korean act to receive a certification from the Recording Industry Association of America (RIAA) with their single "Ddu-Du Ddu-Du" (2018), whose music video was the first by a Korean group to surpass one billion views and is currently the most-viewed by a Korean group on YouTube.[4] Their 2018 song "Kiss and Make Up", a collaboration with Dua Lipa, was the first by a Korean group to receive a certification from the British Phonographic Industry (BPI)[5] and a platinum certification from the Australian Recording Industry Association (ARIA).[6]
Blackpink has broken numerous online records throughout their career. Their music videos for "Kill This Love" (2019) and "How You Like That" (2020) each set records for the most-viewed music video within the first 24 hours of release, with the latter breaking three and setting two Guinness World Records.[7] They are the first music group and Korean female act to have five music videos accumulate one billion views each on YouTube;[8] the most-subscribed music act on the platform and the first to reach over 75 million subscribers;[9] and the most-followed girl group on Spotify.[10] Their other accolades include the New Artist of the Year Award at the 31st Golden Disc Awards and the 26th Seoul Music Awards, the Mnet Asian Music Award for Best Female Group in 2020, the first MTV Music Video Award won by a Korean girl group,[11] and recognition as the first female Korean group on Forbes' 30 Under 30 Asia.[12] They have been acknowledged as one of the most powerful celebrities in South Korea by Forbes Korea (placing first in 2019, third in 2020, and second in 2021)[13] and by former South Korean President Moon Jae-in as a global K-pop phenomenon helping spread K-pop content worldwide.[14] 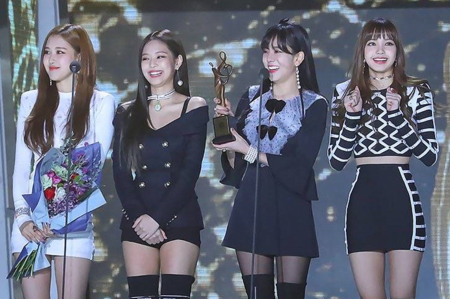 2010–2016: Formation and pre-debut activities
Blackpink began forming when YG Entertainment held tryouts worldwide for preteen or teenage recruits to create a new girl group after launching its first major one, 2NE1, in 2009. According to the members, joining the label as trainees was akin to enrolling in a full-time pop-star academy, with Jennie describing the experience as "more strict than school" and Rosé comparing it to The X Factor with dorm rooms. For members who had left their lives outside of South Korea, the pace of training alongside the culture shock was especially difficult.[15] Preparations for Blackpink's debut began as early as 2011, when YG Entertainment revealed on November 14 that their new girl group would debut in the early half of 2012 and feature at least seven members.[16] Since then, numerous news and rumors surfaced surrounding the new girl group's debut being delayed, although there had been no official information.[17][18] It was only on May 18, 2016 that YG Entertainment confirmed the girl group would debut that July, stating that the members were selected through years of stiff competition.[19] The label later confirmed that Jang Hanna and Moon Sua, who were introduced to the public as potential members of the new girl group, were not included in the lineup.[20][21]
Jennie was the first group member revealed, on June 1, 2016.[22] She joined YG Entertainment as a trainee in 2010 after moving back to South Korea from New Zealand.[23] She had been introduced to the public for the first time in 2012 in a photo titled "Who's that girl?" on YG Entertainment's website on April 10.[24] Jennie continued to be promoted as a member of the new girl group through multiple collaborations: she starred in G-Dragon's 2012 music video for "That XX" from his One of a Kind EP and featured in the song "Black" from his 2013 album Coup d'etat (2013) and Lee Hi's song "Special" from her album First Love (2013).[25][26][27]
Lisa was revealed as the new girl group's second member on June 8, 2016.[28] She was the only individual among 4,000 applicants to pass the 2010 YG Entertainment audition in her native country Thailand and became the label's first foreign trainee in 2011.[23] She was first introduced in May 2012 in a video that was posted on YG Entertainment's YouTube channel, titled "WHO'S THAT GIRL???".[28] Lisa also appeared in the music video for Taeyang's "Ringa Linga" in 2013. She became a spokesperson for street-wear brand Nona9on in 2015 and cosmetics brand Moonshot in 2016.[29]
Jisoo was revealed as the new group's third member on June 15, 2016. She joined YG Entertainment as a trainee in July 2011 and appeared in several advertisements and music videos in her pre-debut years, including "Spoiler + Happy Ending" (2014) from Epik High's studio album Shoebox and Hi Suhyun's music video "I'm Different" (2014). She also made a cameo appearance in 2015 drama The Producers.[30]
Rosé was the final member to be revealed, on June 22, 2016. She ranked first among 700 applicants in the 2012 YG Entertainment audition in Australia, after which she signed a trainee contract with the label and moved to Seoul to begin training.[23] She featured in G-Dragon's track "Without You" (2012) from One of a Kind, credited as "? from YG New Girl Group" until her official public introduction.[31]